by Michael Lounsbury and Tim Hannigan 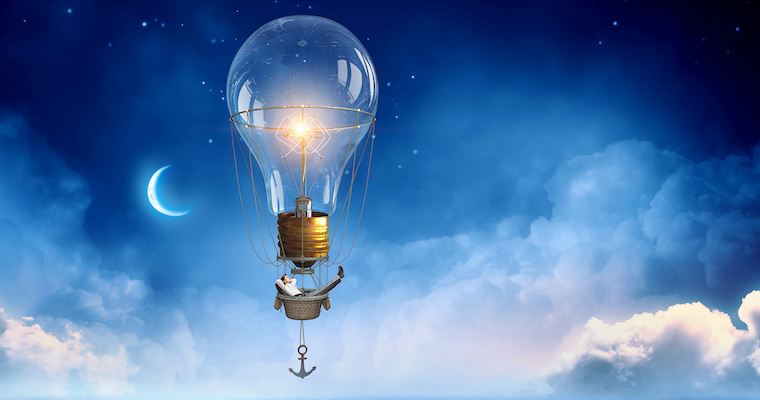 For several decades, entrepreneurship scholarship has been fixated on understanding the “the processes of discovery, evaluation, and exploitation of opportunities” (Shane & Venkataraman, 2000: 218). This has fundamentally shaped how we teach entrepreneurship to students at all levels, leading to an emphasis on the heroic cognitive powers of individuals.

However, the process of where ideas come from has been far less studied, and we need to understand this more deeply. Consider that nanotechnology had its genesis in science fiction stories, which stimulated widespread conversations about many possible futures—both utopian and dystopian (Granqvist and Laurila, 2011). Eventually these discussions spurred dreamers to experiment in nanotechnology, which paved the way for discovery, opportunity and marketable products. We feel that storytelling and other intangible, unmeasurable factors play an important role in providing the initial wisps of ideas that eventually solidify into opportunities to be exploited.

Only a few scholars (e.g., Alvarez & Barney, 2010) have studied how entrepreneurial opportunities are created rather than exploited. Even this research has still focused on the efforts of entrepreneurs who have successfully exploited opportunities. However, entrepreneurship also involves the fleeting, harder-to-measure exploration of ideas (March, 1991) where failure is much more prevalent; success the exception (Aldrich & Ruef, 2018).

Concentrating on how the attention and behavior of entrepreneurs is shaped by previously told future-oriented stories that begin to gain resonance as dreams that can be plausibly realized (Lounsbury & Glynn, 2019), and on the flow of entrepreneurial possibilities, gives us a richer, and more comprehensive understanding of entrepreneurial processes. This may be thought of as the early moments of opportunity formation (Hannigan et al., 2021) before anyone even senses that there is an opportunity to exploit; well before the “fools rush in” (Aldrich & Fiol, 1991).

FROM ENTREPRENEURIAL EXPLOITATION TO EXPLORATION

While many have argued that a richer understanding of entrepreneurial processes requires a multi-disciplinary lens (e.g., Aldrich, Ruef & Lippmann, 2020), the field has always focused on observed and tangible outcomes, undergirded by theory that has its roots in the 19th century Austrian economic tradition.Back then, Schumpeter envisioned the entrepreneur as a bold-thinking, charismatic leader who could generate disequilibria by combining resources in novel ways, catalyzing a process of creative destruction. Later on, Kirzner would emphasize how successful entrepreneurs possess the cognitive trait of “alertness” that enables them to detect and recognize valuable business opportunities.

While this focus on how entrepreneurs discover and exploit opportunities has been productive, it has tended to neglect the study of where opportunities come from, and processes related to entrepreneurial exploration. As one of the few economists studying how markets emerge, Geroski (2003: 76) pointed to the distinction between inventions and marketable products, reflecting that “new technologies typically arrive in markets as a bundle of possibilities.” This suggests that entrepreneurial opportunities do not appear ready-made for entrepreneurs to activate and implement.

Thus, opportunity exploitation and possibility exploration are distinctive processes that require a deeper unpacking, particularly if they are at a phase where measurement is impossible. In his seminal paper, March (1991: 71) defined exploitation as “refinement, choice, production, efficiency, selection, implementation and execution,” contrasting it with exploration, which involves “search, variation, risk‐taking, experimentation, play, flexibility, discovery, and innovation.” That is, exploration involves “a pursuit of new knowledge,” whereas exploitation involves “the use and development of things already known” (Levinthal & March, 1993: 105).

In her effort to redirect research towards the study of entrepreneurial exploration, Sarasvathy (e.g., 2008) developed the idea of effectuation: entrepreneurs have provisional goals and use whatever resources they have to guide the development of their pursuits. The lean startup method and others that emphasize the role of experimentation (e.g., Foss & Klein, 2017) are examples of this approach.  However, this still doesn’t give us a wider understanding of entrepreneurial possibilities, which in the future give rise to entrepreneurs, opportunities and tangible products.

ENTREPRENEURIAL POSSIBILITIES: THE ROLE OF STORY-TELLING

In their book on cultural entrepreneurship, Lounsbury and Glynn (2019) put forth a new approach to the study of entrepreneurial exploration, focusing on how storytelling is at its core. While storytelling is obviously important to entrepreneurial pitches and the legitimation of new ventures, stories also have inspired and mobilized entrepreneurs who try to construct the future by highlighting what might be possible—making plausible linkages between what exists today and how their dreams for the future will be able to come true.

These future-oriented stories “serve as maps for action and provide both motivation and orientation (i.e., moral, emotional, and practical guidance). Such narratives [also] reduce complexity and persuade individuals and groups of the ‘actionability’ (i.e., desirability and feasibility) of particular lines of action” (Mische, 2014: 444). This body of work demonstrates pathways from stories as unobserved futures to possibilities that may be plausible.

Such future-oriented stories are especially important in generating more radical changes linked to developmental frontiers such as nanotechnology or blockchain, or the creation of new markets such as local food, quantum computing or electronic vehicles. Research suggests that before investment into new technologies and markets occurs in a serious way, believable stories need to be told and retold not only by entrepreneurs, but also by credible third parties including investors, policy makers and the media. Recent research has demonstrated how the growing resonance of stories shapes attention in an entrepreneurial ecosystem, highlighting how the emergence of entrepreneurial possibilities is driven by different groups of people converging and sharing similar types of stories (Hannigan et al., 2021). However, we still do not have a firm grasp on the mechanisms of how this evolves.

In the early development of future opportunities to exploit, there is often a cacophony of stories told that lay out various possible pathways for the construction of an opportunity (Wry, Lounsbury & Glynn, 2011). Many of these storied pathways might conflict, and not all pan out. We have very little understanding of how various kinds of entrepreneurial possibilities come to light, and either gain or lose traction as stories that resonate. These are the early moments that bring new entrepreneurs into existence as people and organizations begin to join a story, constituting an identity associated with making a dream a reality.

Understanding how opportunities begin as possibilities is a helpful step towards unpacking their emergence. This is not about describing a chaos of infinite possibilities; we instead advocate for a systematic mapping of the space of various possible futures where entrepreneurial exploration occurs. Such analytical approaches may draw on topic modeling and other techniques of analyzing large amounts of data (Hannigan et. al., 2019; Hannigan et. al., forthcoming).

As Aldrich & Ruef (2018) forcefully argue, entrepreneurship research has a major issue with representativeness of data. Studying successful entrepreneurial efforts and neglecting failures has far too often meant sampling on the dependent variable. Focusing too much attention researching narrow samples of “unicorn” or “gazelle” firms that obtain venture capital funding or undergo initial public offerings (IPO) can distract from the broader phenomenon of entrepreneurship. In a similar light, focusing attention on opportunities brings a bias in favor of what can be measured.

We advocate for a view that emphasizes the as-yet-unobserved early moments – not simply as counterfactuals for quasi-experiments, but in systematically mapping collective storytelling and the construction of plausible futures. The promise here is enhancing understanding of the processes by which entrepreneurial possibilities take shape, seeding what will later be coded as tangible opportunities that become exploited. Thus, an adequate explanation of opportunities requires the study of paths chosen amidst a range of possibilities where most paths fail. This is at the heart of cultural entrepreneurship.

Aldrich, H. E., & Ruef, M. (2018). Unicorns, Gazelles, and Other Distractions on the Way to Understanding Real Entrepreneurship in the United States. Academy of Management Perspectives, 32(4), 458–472.