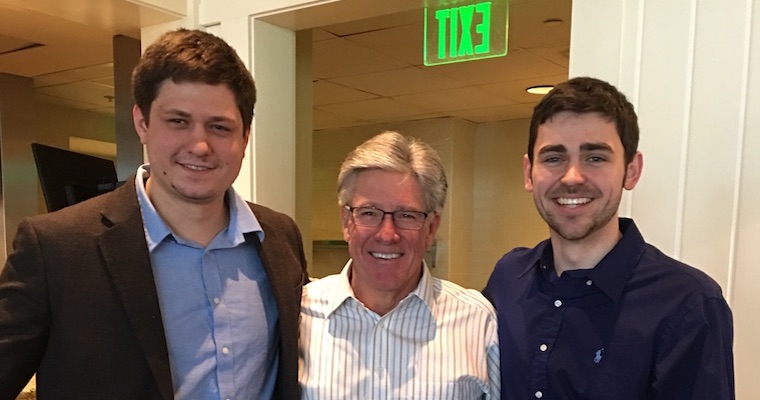 EDITOR'S NOTE: This is the sixth in a series of articles featuring past winners of e-Fest, EIX's undergraduate business plan competition, and their journey since then.

For people in third-world countries without bank accounts, those struggling to manage their money online, or those who simply do not want to deal with physical cash, Yellow Card provides a secure, easy-to-access platform for managing cryptocurrency.

The company has around 36,000 stores operating in Nigeria alone, which allow depositing, paying or withdrawing cash, and exchanging cash for Bitcoin. Yellow Card seeks a reality of financial inclusion for all, where everyone can experience the financial freedom of using cryptocurrency.

He and CTO Justin Poiroux started selling Bitcoin around 2015, but did not begin building their company until 2017. Between 2015 and 2016, Maurice and Poiroux could be found selling Bitcoin out of a Taco Bell in Auburn, Alabama.

“You could find Justin and I sitting at the back corner table, eating a Doritos Locos taco 12-pack, and you could slap a couple hundred dollars on the table,” Maurice said. “And we would give you the coin, and that went on for a couple of weeks.”

In a three-week period, they managed to set up stations for buying Bitcoin at another six Taco Bells in the eastern US. This, according to Maurice, was their first foray into creating an agent network for cryptocurrency management.

“We did that for about two and a half months and thought, man, we should probably do something less sketchy with our lives,” Maurice said. “So, that's when we started building Yellow Card for scale.”

Maurice recalled meeting a Wells Fargo worker some time between late 2017 and early 2018, who was sending $200 overseas to his family in Nigeria. The bank charged him $90 to do so.

This inspired Maurice and Poiroux to begin researching these costly obstacles to effective money management. Maurice wants to serve many of the “underserved” parts of the world through his technology, and he argued that Africa was the best place to invest. In terms of market potential, Nigeria boasts 200 million people and Africa’s largest GDP.

“All the growth over the next 30 years is going to be coming from Africa,” Maurice said. “Growth is very slow in the US and China because it's so large already. Africa has the most room to grow in the world.” Maurice added he would consider it “borderline irresponsible” for investors to not to at least consider investing in Africa as a market.

Yellow Card won the 3rd place prize of $25,000 at the 2017 e-Fest, which Maurice said helped him tremendously in bootstrapping his new business while he was in college.

Since e-Fest, the company has swelled to 36 full-time employees and gained an investment from Binance: the largest cryptocurrency exchange in the world. They also recently announced a $1.5 million investment from several key crypto currency and general startup funds -- including Andreessen Horowitz, Polychain and Celo.

In a press release at the end of August, it was announced that the Celo Ecosystem Fund, a new Polychain-created fund also supported by Andreessen Horowitz and Celo, invested the capital in Yellow Card to further its expansion efforts. This came to fruition after Yellow Card’s official launch in Nigeria in June of 2019.

What’s more, the company just launched their services in Kenya and Cameroon on September 1st, and have announced a new COO in Jason Marshall, former senior director of Walmart payment services. Yellow Card has expanded to South Africa and Botswana, and the company is eyeing further expansion.

“Our goal is to make this technology accessible to anyone, no matter where you live,” Maurice said.

The company meets its financial goals through marketing, acquiring new customers and spreading awareness of its service. Customer feedback is also especially valuable for the Yellow Card team, and it has been positive because of its easy-to-use interface.

Here’s a look at the company’s progress since 2017.