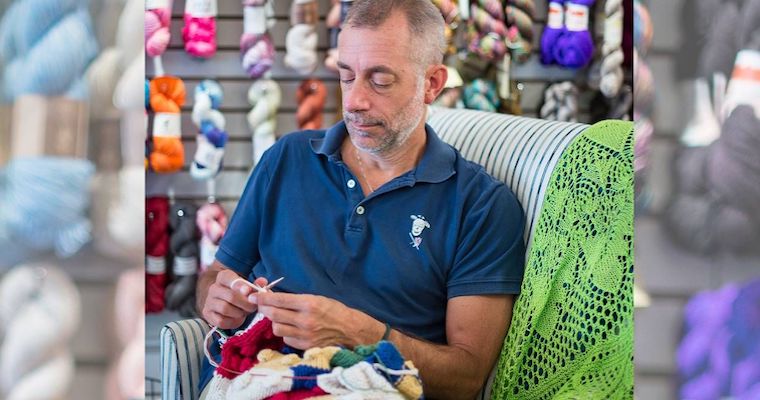 At the age of 51, Russell Brent launched Balzac & Company, a successful yarn store in Ocean Grove, N.J. Like many other second act personalities, Brent found his inspiration by returning to an early childhood passion  |  Credit: Courtesy of Russell Brent/Balzac & Company

EDITOR'S NOTE: This article is part of America's Entrepreneurs, a Next Avenue initiative made possible by the Richard M. Schulze Family Foundation and EIX.

Russell Brent's mother was a master knitter. And she taught her son to knit at a young age. As Brent remembers it, "I learned how to push two sticks around with a little bit of yarn, cables and lace and that sort of thing." But it was the mid-1970s and Brent dropped his needles when he repeatedly heard the phrase "boys don't knit" from family and friends.

Thirty-plus years later he was walking his dog in San Francisco and a display in a local yarn shop caught his eye.

"I stopped in and asked how much for the beautiful Afghan in the window?" Brent said. "And they were like, 'Here's the pattern. Here's the yarn. Here are the needles.'"

He started knitting again, making baby caps for his friends who were starting families. "They were vegetables, strawberries and blueberries. The most popular one was an eggplant. And it just developed from there." Brent rediscovered knitting and found it relaxing and meditative.

In 2017, Brent's husband Nick accepted a job offer in New York City. The pair made the move from San Francisco to the East Coast. They ended up purchasing a weekend home on the Jersey shore.

"We were introduced to Ocean Grove, N.J., by some friends and we fell in love with the community. It's a beautiful town and we decided to put down roots," said Brent.

One afternoon he was working in their new home on a knitting project and he needed some additional supplies to finish his work. With no car and the closest yarn store 30 minutes away, Brent expressed his frustration to his husband who remarked, "Well, why don't you open your own store?"

Eager to Build a Community of Knitters

In his previous career, Brent worked on the West Coast for a mix of larger companies (Visa,  SLO, Studio O&A) and not-for-profits (ArtReach, California Council on Environmental & Economic Balance) in the areas of office/events management. He always enjoyed building a sense of community with his co-workers.

In his next career move, Brent was able to build on that experience in a new way. Within nine months and at the age of 51, he opened Balzac & Company on Main Street in Ocean Grove.

"I wanted a place where everyone knows your name and the project you're working on. I wanted to build a real community," he said.

The shop takes its name from Honoré de Balzac, a French novelist and playwright from the 19th century. "I like the way that he writes about his characters. He was one of the first authors to write in a realistic manner," Brent said.

"We Will Create Together" is the store's mantra. As Brent puts it, "We're here to help you find the right project for you. Picking a project, finding yarn, colors, needles and a pattern can be a little overwhelming. We're here to guide you through the process."

The store quickly built a following of loyal knitting enthusiasts. "Customer service is everything to us. Everything. We are by definition unique from other retail stores because we're a destination shop," he said. "We regularly get people traveling at least an hour, if not two or three, to come to the shop."

Bouncing Back from the Pandemic

In March 2020, the COVID-19 pandemic hit Brent's business hard. He was forced to lay off his entire staff and pivot to online and telephone orders only.

"I would run yarn out to cars who had stopped in the middle of the street and opened their hatchback. But for nine months, we had little to no business. It wasn't easy," Brent said.

As local restrictions eased, he was able to rehire his team and reopen the store to customers. Business has picked up and he reports that the store is now breaking even.

Brent's advice to others considering starting their own business is simple: "Follow your heart and pursue your dream."

And it helps to have a supportive spouse. "Nick has been amazing. He's always saying, 'What do you need from me to make this work? Or 'okay, let me get out of your way,'" Brent said. "Having that support at home means I can focus and make this happen."

Brent finds his work deeply satisfying. As he said, "I have an amazing team and I know that we are appreciated in the community. And I work in a yarn shop. I get to touch cashmere, and alpaca, and silk, and Merino all day long. I'm surrounded by the most beautiful colors on the planet. How can you not be happy working in a yarn shop?"