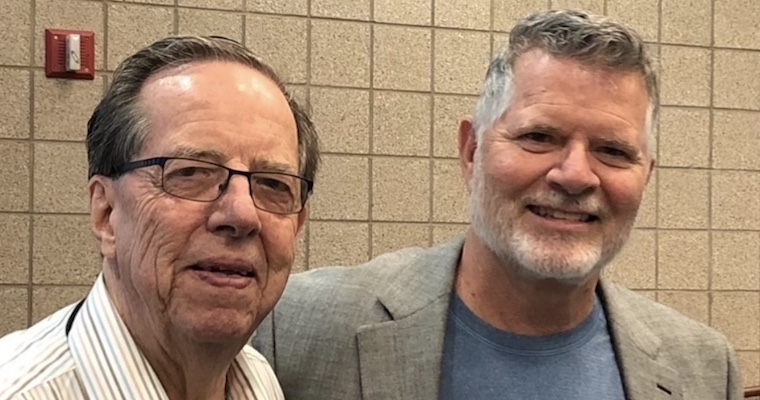 Gordon Davis and Jim Wetherbe at the Celebration of 50 Years of MIS at the University of Minnesota in 2018.

It takes a Herculean entrepreneurial effort to create and sustain a new academic discipline. Woodrow Wilson once observed that, “It is easier to change the location of a cemetery than to change the school curriculum.”

Professor Emeritus Gordon Davis achieved just that for the field of Management Information Systems (MIS) at the University of Minnesota, starting in 1967. He left an amazing legacy when he passed on May 6, 2022 at the age of 91.

Both of us knew him well – personally and through his books and his teachings. Through this tribute, we hope to help many more in the entrepreneurship community get to know Gordon, whose work has had an outsized impact on all of us whether we realize it or not.

Dick Schulze, the founder of Best Buy and EIX, appreciates how MIS and information technology have been so critical to so many entrepreneurial organizations. When he learned that Gordon, a fellow Minnesotan, had passed away, he encouraged me:

“Jim, continue to pass Gordon’s learnings on to so many others as you have me.”

I was honored to have Gordon as a friend and colleague for over 40 years. We worked together at the University of Minnesota, where I was Director of the MIS Research Center and publisher of the MIS Quarterly, both of which he co-founded.

But I “knew” Gordon Davis long before I met him. The first widely accepted definition of MIS that has withstood the test of time was published in 1974 in Gordon’s landmark book:

“MIS is an integrated user machine system that supports the decision making, management, and operations of an organization. It utilizes hardware, software, data, people, and procedures.” (Davis 1974).

I recall pleasantly caressing that definition in my mind, grateful for the clarity it provided. It pulled together the scope of the field of MIS. It was no longer just about computers.

To this day, it is painfully amusing to ask a doctoral student of MIS to define the field. They often go blank and stammer. I mercifully direct them to Gordon’s book and teasingly encourage them not to embarrass themselves in the future!

Gordon‘s foundational work, especially his first textbook on the topic, served as a model for academic programs and other universities throughout the world. He went on to publish 23 books and more than 150 articles. His citations are in the hundreds of thousands.

A Gentleman and a Scholar

I was intimidated when I first met Gordon in 1979. I thought that surely a man of his stature would have quite the ego. I was so wrong. He was authentically kind, accessible, and humble. He was a man of strong faith, which he wore on his sleeve in a non-intrusive manner.  It is for those reasons I affectionately refer to him as Gordon rather his formal title in this tribute to him.

Besides being a gentleman and a scholar, Gordon had a lot to teach about character and friendship. I got caught in political infighting about my early promotion to full professor in 1983 and decided to achieve the promotion by leaving the University of Minnesota. Gordon reassured me that he would intervene and make it right. He said if he couldn’t, I could pick another university and we would both go there together! Fortunately, he did solve the problem with the finesse for which he was well known. I remain overwhelmed by that generous gesture of loyalty to this day.

The University of Minnesota MIS program has produced over 200 PhD’s (affectionately referred to as the Minnesota mafia), over half of them supervised by Gordon.  To provide deeper insight into the quality of impact Gordon had on the field, I asked Brian Janz, a former doctoral student and now a professor and editor at EIX, to share what it was like to be a doctoral student under Gordon’s oversight and guidance.

Brian’s Memories: The Honor of Being a Student of a Legend

Many in the EIX community don’t realize we lost a unique entrepreneur recently. I say “unique” because most people wouldn’t consider Dr. Gordon Davis -- a highly regarded career scholar -- as an entrepreneur.  I was a doctoral student of Gordon’s, and he was also my dissertation co-advisor. My co-author and EIX co-founder Jim Wetherbe was my other co-advisor. (I am a lucky guy.)

Gordon’s recent passing caused me to reflect on what a kind, accomplished, and impressive person he was. It occurred to me that he embodied many key characteristics we often find in successful entrepreneurs.

First, a little background: Gordon was the thought leader of a small group of pioneering academics that created the field of Management Information Systems (MIS), and the world’s first academic program in that field, in 1967 at the University of Minnesota.  He had the entrepreneurial vision to see the need for a new-to-the-world discipline that brought together the technical, social, and behavioral aspects of the nascent computer industry.  MIS represented an innovation that has forever changed how we think about, develop, deliver, and manage information technology resources.

In addition to vision, Gordon possessed the entrepreneurial knack for finding the “win-win” in his efforts. With regard to MIS, Gordon was always able to walk the fine line between what would “sell” in academia (i.e., get published), while at the same time would be relevant enough to “sell” to practitioners — the ultimate customers of applied scholarly research.

Like all good entrepreneurs, Gordon was blessed with living in a constant state of almost child-like curiosity. Every conversation with Gordon was filled with “Why’s?,” “What if’s?,” and “So what’s?” This curiosity served him well as an active university scholar for more than 60 years.

Similarly, Gordon was able to appreciate both the big picture and the small details. While he is widely considered one of the godfathers of developing IT systems, a huge sub-field of MIS, I fondly remember sitting in his office discussing whether we should call it “system development” or “systems development.” (Note: For my dissertation at least, we opted for “systems development.”)

Finally, all great entrepreneurs must have a level of optimism — a “can do,” “never give up” attitude — about the world and their work’s impact on it. Here, Gordon made an impact few people realize: He instilled that attitude in doctoral students attempting their  Ph.D. dissertations. This is the biggest product doctoral candidates must develop, and it needs to be original in its contribution. It is often the one requirement that keeps wannabe Ph.D.’s as “ABD’s” (all but dissertation). Gordon saw how the magnitude of this “big paper” often spelled defeat for his students, so he developed a roadmap to ensure dissertation success. Armed with this roadmap, almost all of Gordon’s doctoral students moved from “wannabe Ph.D.” to the real deal.  He eventually published a small monograph outlining his roadmap, “Writing the Doctoral Dissertation,” that has helped tens of thousands of students to achieve this milestone and their dreams.

So, these are a few key attributes most successful entrepreneurs possess, and Gordon Davis was no different in this respect. I will close by adding that while Gordon was one of the most famous academics I’ve known, he was also one of the kindest and most humble people I’ve known. While entrepreneurs don’t have to be kind and humble, it’s certainly nice when they are.

Wetherbe, J.C., 50 Years of The DATA BASE for Advances in Information Systems: Reflections of the Editor in the Middle, ACM SIGMIS, February 2019.