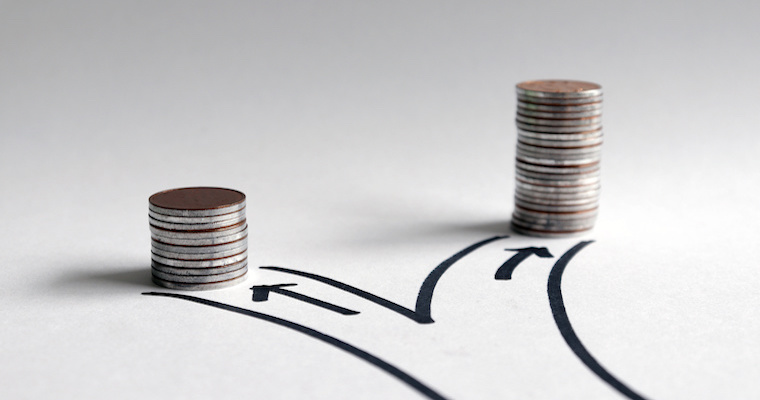 People choose jobs for many reasons: location, learning opportunities, coworkers, and corporate culture. But pay also matters for most: not just what a job offers initially but also what it might lead to in long-term earnings. Our research suggests that, unfortunately, most startup employees earn less -- both at the time of hiring and in the long run.

To understand better how joining a startup influences earnings in both the short- and long-term, we studied the income trajectories of more than 100,000 startup employees in Denmark, in everything from hospitality to high tech. Our results appear in two recent papers [1, 2]: this one in Industrial & Labor Relations Review and this one in Organization Science.

Imagine that you have two job offers, one from an exciting startup, another from a large, established firm. The established firm offers prestige, job stability, and a clear career path. The startup, meanwhile, promises more job variety and autonomy, and more flexibility in when and where you work.

How might the two compare in pay? In most cases, the startup would have offered a lower starting salary. In our study, we found that startups, particularly small startups, paid less. For example, a startup with a dozen employees paid about 4% less than one with more than 50 employees in the first year of employment [1]. That initial pay penalty exists even when comparing people of the same age, education, experience, occupation, and industry, and with similar annual earnings in their previous jobs.

But what about in the longer run? Startups tempt potential employees with promises of faster promotion into senior positions, and with the prospect of future financial gains. Your offer might come from founders who have ambitious plans. You could imagine yourself soon supervising a slew of hires. If the startup hits it big, your salary could rise rapidly and your stock might end up being worth millions. Even if it does not, the experience might accelerate your career in a larger company.

Unfortunately, that outcome appears more the exception than the rule. On average, those who joined startups as employees earned 17 percent less in the subsequent 10 years than those who joined established firms [2]. Some of that difference stems from who joins startups. Startup employees, for example, have less experience on average. But even after accounting for age, experience, and a host of other factors, we found that, in the 10 years following a stint at a startup, employees who joined as one of the first 50 employees earned about 10% less than their peers at large, established employers.

Why do the early employees of startups earn less in the long run? Two factors play a role. First and foremost, individuals who join small startups, those with fewer than 50 employees, have more and longer spells of unemployment. Most startups fail, meaning that most startup employees will find themselves searching for a job at some point. Not only do they lose out on income while unemployed, but they also earn less in their next job, as this paper suggests [3], probably because they do not have much bargaining power when they negotiate their salaries.

Second, we found that the employees of small startups became almost trapped in small firm employment. Although that may simply mean that they loved being part of a small team so much that they did not try to move to a larger employer, our research suggests that the skills and experience gained by startup employees – becoming something of a “jack-of-all-trades” – does not fit well with the hiring of large firms, who instead often want a master-of-one [2, 4].

Is the image of fast learning and steep growth in startups a myth? Not entirely. Individuals who joined startups that became successful – in our study, firms that grew to more than fifty employees in their first 10 years – earned a 2% premium over their peers in large, established firms. But only about 2% of startups ever reached that size.

A Bonus for Latecomers

More generally, we found that the pay penalty depended on the size of the startup at the time of hiring. Those who joined as one of the first five employees suffered the largest long-term pay penalties. By employee number 40 or so, the pay penalty disappeared. The later employees of rapidly-growing startups – those who joined once the firm had already reached a size of 50 or more employees – actually earned a premium in the long run, of about 4% over their peers in older firms of similar size.

You might still want to join that startup. Startups often offer more autonomy, more responsibility, more schedule flexibility, and more freedom to craft a unique role. Fellow employees can become friends, almost family. There’s also the reward of being part of building something new and exciting. But you should go into it with open eyes, understanding that you will probably pay a price for all of these benefits, by earning less than you could in a corporate giant.