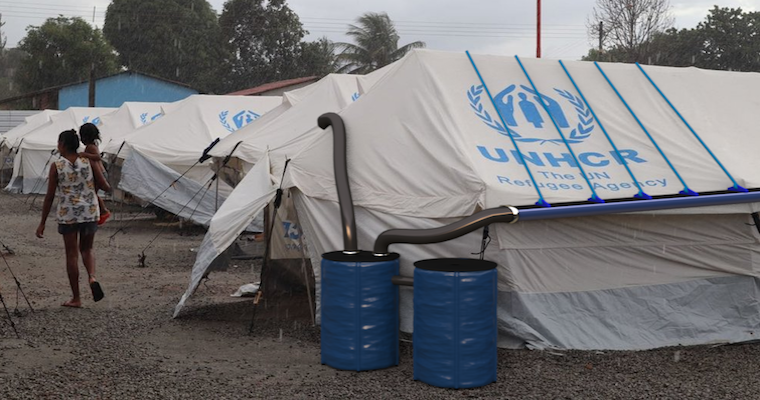 EDITOR'S NOTE: This is the third in a series of articles featuring past winners of e-Fest, EIX's undergraduate business plan competition, and their journey since then.

LivingWaters Systems is a social venture company founded by CEO Joshua Kao of Rutgers University and includes a team of capable, multidisciplinary students from the University of Chicago. The team believes that clean water is a fundamental human right, but that not every corner of the world shares this right equally. LivingWaters formed to meet the need for cleaner water supplies beginning in Rajasthan, India, an especially vulnerable state with over 17,000 villages in the area facing severe shortages of clean groundwater.

In their pilot program, the company introduced prototypes for a collapsible, portable system for harvesting, filtering and storing rainwater to impoverished families in seven of these villages. Each unit takes only 20 minutes to set up, and is easily accessible at the doorsteps of peoples' homes. LivingWaters units are also affordable: only $15 in material and manufacturing costs per unit, with another $5 in shipping, packaging and inventory.

“When we were preparing to pilot our first functional prototypes in India, as an undergraduate team then, getting first through the door funding was a challenge,” Kao said. “Thankfully, within a matter of days before our planned operations there, the Robert Wood Johnson Foundation generously provided us $10,000, which supplied our travel and logistics arrangements...”

Along with its founder, the team includes Rutgers University mechanical engineer Joseph Bajor, who became the CTO of LivingWaters, and a team of multidisciplinary Master’s students from the University of Chicago, including Joshua's brother Caleb Kao. The results of the Rajasthan pilot made it clear that regional water sources were not plentiful or clean enough to serve the people who needed it over the long term.

“Rajasthan India was a watershed moment for our venture,” Joshua Kao said. “It introduced us to the common water and sanitation deficiencies faced by off-grid settlements in South Asia that are shared in many settlements that we came across in Latin America as well.”

LivingWaters won the Social Impact award at e-Fest 2019 for its portable rainwater collection system, and with it the $10,000 prize. Since then, LivingWaters Systems has also received additional honors, including first place prize at the 2020 Booth Social New Venture Challenge at the University of Chicago. The university’s Rustandy Center for Social Sector Innovation and Polsky Center for Entrepreneurship and Innovation have also invested in LivingWaters and provided them with legal aid, mentorship and other services.

Latin America will serve as the company’s next pilot, where it will focus on testing its water systems in Brazilian refugee settlements for displaced Venezuelans.

“This will help us get insightful information about the needs in these places and how to better adapt the product to these particular communities,” said COO Gabriela Saade.

CEO Kao hopes the low-cost, compact and portable design of their systems also becomes standard use in situations of humanitarian crisis, where water instantly becomes the most valued resource, and LivingWaters Head of Research and Development Melis Ozkan envisions their units providing essential relief in cases of natural disasters.

"Although it is heartbreaking, climate change will push even more people out of their homes," Ozkan said. "If LivingWaters Systems is able to provide a device that helps maintain the health of populations in need easily, this is a huge accomplishment."

Here’s a look at the company’s current status.