The Story Behind the Business Model Canvas 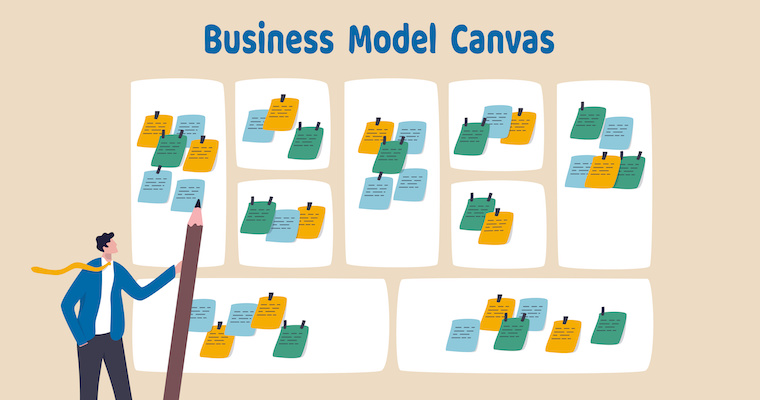 The Business Model Canvas (BMC) is certainly one of the best-known strategy tools for conceiving the business model of a start-up or analyzing the business model of an established company. It is a visual chart that takes the shape of 9 boxes focusing on an organization’s value proposition, its customers, its resources and capabilities, and its revenues and expenses. The BMC has been taught in almost every business school around the world, and Business Model Generation – the book that publicized the Canvas – has sold over 4 million copies. Since then, three other books have been published to constitute a series aimed at conceiving and analyzing business models. The brains behind Business Model Canvas – Alexander Osterwalder and Yves Pigneur – have entered the pantheon of management by being recognized since 2015 as two of the 50 best management thinkers, according to the Thinkers 50 ranking.

While BMC has achieved a tremendous success and is known by every business student, consultant, and entrepreneur, what is less known is how this tool came into being. My research project aimed to go behind the scenes of important concepts, which led to the publication of a book written in French that analyzes how 11 management concepts and tools developed. Among them was the BMC,  and I interviewed Osterwalder, Pigneur, and others who have worked with them. I also read their books, Osterwalder’s blog, and publications about the Canvas. The result was the full story of how BMC developed.

While some of you may already know that the Canvas came out of a Swiss PhD dissertation, you may not be aware of how the worldview, or general outlook of its innovators, influenced its development. Let’s go behind the scenes of the BMC to focus on three ideas that were at its inception and have shaped the developmental process of the Canvas all along: the crafting of strategy tools, business model typologies, and business model experimentation. The story of how BMC developed can teach business students, consultants and entrepreneurs much about developing or using management tools, as this story helps showcase the roles of the innovators’ experience, tools experimentation, and time.

The first idea involves the making, or “crafting,” of strategy-related tools. When Osterwalder undertook his PhD dissertation under the Pigneur's supervision, he intended to build the foundation for a set of new computer-assisted management tools. In fact, after coming up with a business model ontology that aimed at developing a generic framework to describe and capture any possible business model, the last chapter of his dissertation codifies the ontology using the XML language. And Osterwalder kept this idea throughout the Business Model Canvas journey. After a few years spent in consulting right after defending his dissertation, he created a venture he called Business Model Foundry: as he acknowledges himself, he wanted to become a “blacksmith” specialized in crafting strategy tools. The Foundry was later renamed Strategyzer, which remains an active venture offering BMC-related services. Over time, moreover, the Foundry has not only crafted strategy tools such as the Business Model Canvas, the Value Proposition Canvas, and the Culture Map, but has also offered innovation management software to help corporations sketch out business ideas and test if they are worth pursuing. As Osterwalder argues using the Swiss army knife metaphor: “You don’t want a heart surgeon to turn up for your surgery with a Swiss army knife. You don’t want them to use the wrong tools.”

The second idea is that of developing an exhaustive list of typologies, or types of models, that enable a business to make money. These types include but also go beyond the classic “freemium” business model. In the freemium model, a basic product or service is provided free of charge, but money is charged for additional features (e.g., Dropbox). Another type is the razor-and-blade business model, whereby one item is sold at a low price in order to increase sales of a complementary good, such as consumable supplies (e.g., Nespresso). The development of this list began before Osterwalder’s dissertation. By the end of the 1990s, Pigneur began his academic career at the University of Lausanne as a Professor of Management Information Systems. At this time, he was startled by his students who struggled to conceive of a business plan for their start-up. Inspired by some work he had read during a sabbatical at MIT, Pigneur got the idea of exhaustively characterizing all the possible business models of firms. However, as he found out that the concept of business model lacks clarity, the development of a typology was not as straightforward as he initially thought, and he had to make some detours. However, at the end, the idea of a typology of business models is still found 30 years later in the series of four books that he published on business modelling. The first book, Business Model Generation published in 2010, displays 5 patterns of typical business models that include the freemium business model but also others such as the open business model. Similarly, the last book Invincible Company, which was published years later, offers a guide to the world’s best business models by proposing dozens of business model patterns that readers can pick and apply to enhance new ventures or improve their established business models.

The third key idea underlying the development of BMC is that of business model experimentation. As we have seen, after his PhD and before founding the firm Business Model Foundry, Osterwalder entered consulting. He worked for a nongovernmental organization (NGO) in Thailand and in the financial sector in Switzerland. He used these two field settings to test and apply business model thinking. In the meantime, Pigneur could also test the Canvas with his students at the University of Lausanne. These experimentations led to the current shape of the Canvas, which consists of 9 boxes. Pigneur explains that the idea of business model testing is something he learned during a sabbatical in Vancouver, where he discovered the paradigm of design science, a perspective that holds that science should develop artifacts that can be used to solve management issues. This paradigm is at the core of the Osterwalder’s dissertation and infuses the four books he later published on business modelling, as each book dedicates a chapter to testing.

Following their own advice

Not only have Osterwalder and Pigneur emphasized the idea of business model testing throughout their publications and workshops dedicated to business model thinking, but they have also applied it to their own business. “You can’t write on business model innovation without doing it,” explains Pigneur. To publish Business Model Generation, they compared several publishing business models before choosing to self-publish it. As they received an offer from the publisher Wiley, they finally pivoted their business model. Similarly, in their second book, Value Proposition Design, they used their Value Proposition framework to detail the business book of the future. It looks really close to their own value proposition!

Overall, we can see that throughout the development of the Business Model Canvas and since the inception of their idea, Osterwalder and Pigneur have pursued their worldview and even applied it in developing the Canvas. This is what explains the peculiarities and the success of the Business Model Canvas: not only as an idea but also as a tool that must be tested and enriched with the best business models.